Additionally, AAI’s technical staff managed a surface-based drilling program to intercept historical mine workings at the New Elk Mine simultaneous to the underground portion described above. Mine voids were intercepted as planned and used for containment of slurry from the coal preparation plant.

Contact Us
Related Projects
ABOUT US
With our testing facility, drilling capabilities, and experienced mining engineers, geologists and technical staff, we can provide a seamless interface from sample collection and testing to design and construction management. Detailed information on AAI’s capabilities, highly qualified staff, and past projects is available throughout the website. Read More
Follow Our Social Media
Active Project Locations 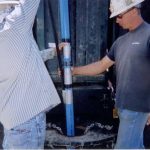