In order to determine if the dam was experiencing bending due to the expansion of the buttresses, in-situ stress measurements were conducted in the concrete arch. Three angled overcoring holes were drilled opposite each buttress from a barge located on the upstream side of the dam, just above the water level. A fourth hole was drilled inside the dam from a narrow inspection tunnel using AAI’s air-powered CP-65 core drill. Measurements indicated that the dam was not experiencing significant bending stresses due to expansion of the buttresses.

Contact Us
Related Projects
ABOUT US
With our testing facility, drilling capabilities, and experienced mining engineers, geologists and technical staff, we can provide a seamless interface from sample collection and testing to design and construction management. Detailed information on AAI’s capabilities, highly qualified staff, and past projects is available throughout the website. Read More
Follow Our Social Media
Active Project Locations 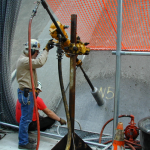