To evaluate the influence of uniformly tensioned roof bolts on roof stability, mechanically anchored roof bolts were installed using the conventional bolter and a specially developed thrust and torque controlled retrofitable box mounted on a bolting machine. Thirteen thousand bolts were installed over 19 crosscuts in a 4-heading development in an operating coal mine. Geological, bolt and mine parameters were recorded at bolt installation, and bolt tension histories, roof sag and other changes evident in the rooms, crosscuts and intersections were recorded over a 2-month period. In all, 24 variables and 11 responses were quantified at 67 bolt clusters. This data was analyzed statistically to determine the significant variables influencing roof stability. As the mine development was safe and stable during the monitoring period, roof sag after two months was used as an index to quantify “stability.” The variables of significance were shown to be coefficient of variation of bolt tension, bolt anchorage capacity, roof lithology, roof shape, standard deviation of bolt tension, and dip of roof lithologies. It was concluded that of the variables with which the mine operator has control, bolt tension uniformity was the most significant parameter at this mine. Other variables, such as intersection type and time between mining and bolting, were not significant, whereas, some other potentially significant variables such as horizontal stress or roof joint frequency did not vary sufficiently for their influence on stability to be evaluated.

With our geologic field services, testing facility, and experienced mining engineers, geologists and technical staff, we can provide a seamless interface from sample collection and testing to design and construction management. Detailed information on AAI’s capabilities, highly qualified staff, and past projects is available throughout the website. Read More 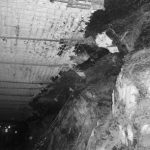