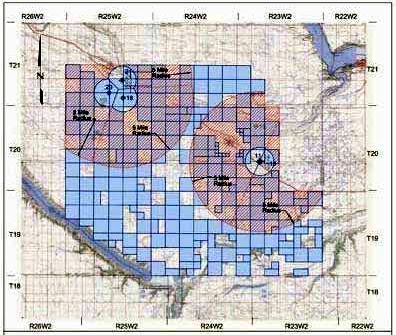 AAI completed a NI 43-101 compliant Technical Report concerning the potash resources contained in the Subsurface Mineral Permit KP 289 in the Findlater area in southern Saskatchewan Canada. The permit area is immediately north of the Mosaic Belle Plaine potash solution mining operation and contains similar quality potash beds as that successfully solution mined by Mosaic and its predecessors for over 30 years. Potash One proposes a confirmation drilling and testing program to confirm the potash resource to support a 2-million-tons-per-year potash operation. AAI was selected to complete the study with Mike Hardy, President, as a designated Qualified Person because of his experience in potash solution mining, solution mining of similar minerals, and independence from the project. The permit area covers approximately 97,000 acres and is intersected by six core holes. Historically, two pilot tests were conducted on the property in the 1960s at the same time that Mosaic was developing the technology for solution mining the deep potash beds in southern Saskatchewan. The property has been surveyed using 2D seismic and is estimated to contain recoverable K2O of over 10,000 tonnes per acre using demonstrated solution mining methods. Currently, AAI is completing a prefeasibility evaluation for solution mining the Legacy project located within the permit area.  AAI is directing the structural logging and core testing, designing cavern and pillar sizes, and refreshing the 43-101 report to include identification of mineral reserves.

In addition, Potash One, Inc. commissioned AAI to analyze subsidence potential from planned solution mining of three potash beds at it Legacy Project in Saskatchewan, Canada for its Environmental Impact Assessment (EIS) as well as prefeasibility through feasibility studies.  The impact of subsidence was predicted using 2- and 3-Dimensional Finite Difference codes (FLAC) as well as Influence Function code (BASIN).  Long-term predictive subsidence was analyzed for 40- and 100-year mine plans using the influence function method during primary and secondary mining.  Hundreds of underground caverns were analyzed for subsidence potential at the Legacy Project site.  The effect of temperature and creep on subsidence were also analyzed.  Vertical strain increments were estimated from the cavern roof to about 200 m above the cavern roof where strain is expected to be minimal.