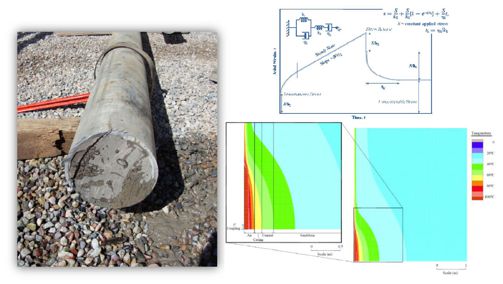 American Shale Oil Corporation (AMSO) holds one of three preference right leases granted in 2007 by the U. S. Bureau of Land Management for the research, design, and development of the Piceance Basin oil shale resource in Colorado.   AMSO with 50%-partner energy-major Total are invested in the development of an innovative and low-impact in-situ retorting process involving a proprietary conduction-convection-reflux process to maximize oil yield from the clay-rich (illitic) Garden Gulch member below the traditional Mahogany Zone.  Pilot-scale testing is planned in 2011.

As of 2011, AAI is engaged in the development and calibration of a geomechanical constitutive model intended for coupling with a comprehensive multi-physics process model being developed by others.  Modification of FLAC’s built-in Burger-Creep model shows promise for simulating first-order characteristics and providing an initial understanding of thermal fracturing around the retort.