To comply with permit conditions and to provide valuable data for locating future wells, American Soda, L.L.P. (ASLLP) needed to characterize the shape of cavities developed by solution mining nahcolite.  The ASLLP cavities were difficult to characterize because solution mining removed less than 25% of the cavity volume leaving the cavern filled with rubblized insolubles.  After evaluating several methods, a novel downhole, seismic technique and partial fluid displacement were selected for demonstration.  In early 2004, ASLLP performed a downhole seismic reflector tracing and partial fluid displacement to characterize the shape of a mature cavity.  The cavity was initially estimated to be on average 95.5 ft in radius and 492 ft in height.  The upper cavern volume estimated from the downhole seismic reflector tracing and the partial fluid displacement method agreed within 10%.  The overall cavity shape and volume determined by the downhole seismic method compared favorably with volume estimated from the historical nahcolite production.  The shape characterization indicated that the maximum cavity radius was 58% larger than the average radius.
Downloadable PDF:  Cavity Shape Characterization of a Rubble-Filled Solution-Mined Cavity 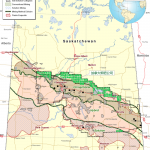