AAI performed a comparative stability evaluation for the East Longwall Panel 8 Gateroads.  Four different gateroads were analyzed, including three- and four-entry layouts.  Analyses were performed using SALT4 and EXPAREA, both of which can model time-dependent salt behavior.  SALT4 was used for two-dimensional analyses of gateroad profile stresses, while EXPAREA was used to analyze vertical pillar stresses.  An instrumentation program was implemented to confirm the modeling effort.

Also, a geotechnical risk assessment of caving and subsidence was conducted for proposed secondary solution mining of abandoned room-and-pillar sections of the mine.  Options for monitoring ground response were evaluated, including the use of TDR cables to characterize caving.  Overcoring stress measurements were conducted to establish baseline abutment stress levels used to calibrate vibrating wire stressmeters.

Subsidence modeling was conducted for evaluating surface impacts resulting from proposed longwall mining options.  Estimates were developed for surface ground strain and displacement to quantify the risk of damage to gas and oil pipelines, communication cables, secondary roadways, a four-lane interstate freeway, and an overpass bridge structure.  A base numerical model was calibrated to subsidence measurements over the mined longwall panels and used as the basis for forecasting subsidence at the proposed mining block to assess the impacts on near-surface structures (roadways and roadway structure, cables, and pipelines).  The impact of subsidence were evaluated using and Influence Function code (Basin). 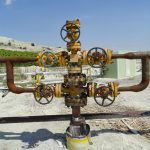