Trona is mined by room-and-pillar methods at the Big Island Mine using high-production continuous mining machines. AAI has provided geotechnical and ventilation consulting services to the mine since 1976.

In addition to numerous rock mechanics investigations, the firm has evaluated two-seam room-and-pillar mining systems, investigated the effect of underground tailings emplacement on pillar stability, designed ground support for underground ore bins and ramps, conducted ventilation surveys, and helped design the ventilation system for mine expansion.  The most significant projects involved the design of a yielding pillar mining system to increase the extraction ratio.  Design and application of yielding pillars was initially tested in a small instrumented area with a conventional panel.  Pillar deformation and stress changes were used to develop a visco-elastic creep formulation used in simulating the long-term yielding of various panel layouts and extraction ratios. Adoption of the yield pillar design led to an increase in both total recovery and productivity.

As part of a multi-phase project to optimize the Big Island Mine, an underground pressure and velocity survey was conducted.  Aneroid barometers were used to measure pressure drops throughout the mine and to construct pressure gradients.  Velocities were concurrently measured.  A network model was developed using the computer codes MTU and MFIRE and calibrated to the field measurements.  The model has been used to assess ventilation alternatives for expansion of mining options.

As part of a geotechnical evaluation of planned two-seam mining at the Big Island Mine, AAI conducted a performance assessment of various proposed roof bolting options. Stress conditions for two-seam mining were analyzed using a panel-scale three-dimensional model considering both rock creep with time and mining sequence. Stress conditions critical to roof stability, and unique to two-seam mining, were identified. Roof bolting options were analyzed using a three- dimensional model of a room-crosscut intersection subject to two-seam mining stresses. Rock properties derived from rock testing were distributed in the model to realistically represent the variable lithology. Roof strata were provided post-failure strain-weakening characteristics for the purpose of simulating propagative fracturing in response to two-seam mining stresses, thus allowing roof falls to occur in the model. Resin and mechanical anchorage bolts, including cable bolts, of varying lengths and on different patterns were evaluated for their ability to prevent roof falls considering a range of local rock quality. A ranking of support performance is under development.

In 1998, AAI was called upon to investigate deteriorating ground conditions in one section of the mine. As part of the investigation, overcore stress measurements were conducted to assess the local stress environment. Laboratory mechanical properties tests were performed to characterize the local rock strength and response to measured stresses. Site-specific numerical models, calibrated to measured stresses, were developed to evaluate the significance of stress concentration from neighboring mining and their potential contribution to poor ground conditions. From numerical modeling, the contribution of abutment stresses from local mining was determined to be insufficient by itself to cause the deteriorating ground conditions.

A detailed three-dimensional model was constructed to evaluate the significance of gas pressure in local roof strata, a phenomenon associated with a number of roof falls. The model incorporated the detailed local lithology, measured rock properties, measured stresses, and multiple-step production room mining sequence. A vertical gas pressure gradient was imposed on the modeled roof strata emanating from a source zone several feet above the mined roof. The model was used to reconstruct actual fall events. For safety planning, the model was further employed to evaluate stability improvements gained by drilling pressure relief holes and modifying the mining sequence. Recommendations derived from the analysis for systematic pressure relief holes and more gradual excavation at crosscut intersections were put into practice throughout the mine.

With our geologic field services, testing facility, and experienced mining engineers, geologists and technical staff, we can provide a seamless interface from sample collection and testing to design and construction management. Detailed information on AAI’s capabilities, highly qualified staff, and past projects is available throughout the website. Read More 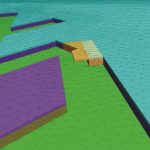