In an effort to minimize cutter roof failure in longwall development entries of a West Virginia coal mine, a three-entry system was developed with the center entry arched into the strata above the coal seam. The purpose of the arched entry was to modify the horizontal stress envelope associated with the three-entry system and improve roof conditions in the adjacent outside entries. Contrary to the predictions of elastic analyses, the presence of the arched entry improved roof conditions by eliminating cutter roof failures in the outside entries. In situ stress determinations and numerical modeling techniques were employed to quantify the impact of the arch and investigate the mechanism of stress relief associated with the arched entry. Stress determinations and underground observations indicated that the roofs of the outside entries were within the zone of stress relief generated by the arch, and that failure or movement along bedding plane discontinuities played a major role in the formation of the stress relieved zone. The numerical model incorporated horizontal joints to simulate bedding plane discontinuities. The properties of the joints were adjusted until roof stresses predicted by the model were in agreement with measured stress profiles. This process resulted in a calibrated analytical tool that could be used to evaluate alternate mining geometries. 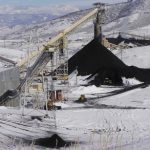