The results of five years of geotechnical investigations are presented to develop productive and stable longwall layouts for the Foidel Creek Mine. The program was initiated during the pre-mining stage, and has continuously provided the data required for mine design. From several stress determinations at the mine, the relationship between geologic structure and the stress field/depth was established. The results were used for orienting the entries for improved stability. Cave conditions and load transfer to panel boundaries were evaluated from closely monitored full extraction mining and computer analysis. Back-analyses of ground movements, as compared with the actual measurements, indicated that cave conditions were favorable in spite of the presence of competent, thick-bedded sandstones in the mine roof. Gate pillar design using a yield-rigid concept was developed through computer analyses and underground instrumentation, resulting in 35- and 75-ft-wide pillars. The influence of a slickensided bedding plane at the roof contact on pillar yield zones, core confinement, and pillar behavior was evaluated. 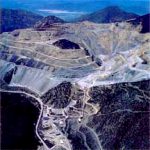