The performance of two large-capacity ventilation systems was compared through tests conducted in a large dead-end heading at a pilot oil shale mine in Colorado. Sulfur hexafluoride tracer gas was used to measure the performance of the two systems: a free-standing jet fan and a reversible fan with rigid duct. The tracer gas was used to simulate the production of mine air pollutants, including blasting pollutants, hot diesel emissions, free methane from surrounding strata, and methane desorbing from muck piles. The test room was 55-ft wide, 30-ft high, and 320-ft long. The performance of the two fans was similar, but the jet fan used less power. The tests showed that either system could provide effective ventilation during oil shale mining. 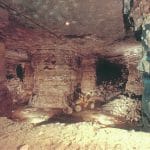