The design of a major underground ventilation and environmental control system is a complex process with many interacting features and, therefore, must not be treated in isolation to avoid costly retrofits later in the life of the mine. To begin underground production, it became necessary for the Agnico-Eagle Mines Ltd. Pinos Altos Gold-Silver project, located in the State of Chihuahua in Northern Mexico, to estimate the air volume required to ventilate the proposed mine while taking into consideration the type, number and size of underground equipment, as well as the required rate of mineral production. Mineralized zones at Santa Niño are up to 800 m long by up to 700 m deep for a distance of almost 5 km. The zones named from east to west are El Apache, Oberón de Weber, San Eligio, Santo Niño, and Cerro Colorado. Ventilation simulation for Santa Niño for a set of life-of-mine plans involving two ramps (one high and one low) and a series of raises with a ramp connection to the Oberón de Weber were analyzed using VnetPC™. In addition, the Oberón de Weber was evaluated as a stand-alone mine and the Santa Niño evaluated independently for the early operating years of the mine. Based on the ventilation simulation options analyzed within the constraints of the mine plans, the quantities required to ventilate the mine were estimated, the main fans were selected, and control device locations and power requirements specified. 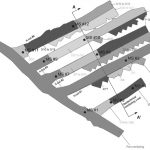 Design and Analysis of Mine Adit-Plugs within a Tailings Storage BasinPublications: Mining Engineering, Publications: Tailings Design