The Skyline #3 Mine of Canyon Fuel Company in Utah was planning longwall mine development adjacent to and downdip of older mine workings known to be flooded. Barrier pillar geometries and widths were proposed by mining company personnel. Hydraulic conductivity testing suggested that the general characteristics of the local coal seam, dikes, and faults are only weakly conductive and that leakage through the barriers, if any, would be minor. The mechanical performance of the proposed barrier pillar design was evaluated according to (1) published empirical design methods and (2) numerical stress modeling. Comparison of the proposed design, with the range of barrier widths derived from the empirical methods, served as a first-order check on the adequacy of the proposed design. Numerical modeling was used to evaluate conditions site-specific to the Skyline #3 Mine and barrier geometry. Models were developed to quantify the relationship between barrier width and the abutment stresses onto the future workings. The models were also used to estimate the stress distribution within the barrier pillars. The hydraulic performance of the proposed barrier pillar design was evaluated according to (1) published empirical design methods for hydraulic impoundments, (2) empirical method estimates of seepage through coal barrier pillars, (3) numerical hydrogeologic flow modeling, and (4) numerical strain modeling. Using the techniques described above, and based on relevant industry experience, underground observations, knowledge of local geologic conditions, hydrogeologic measurements, and analytical results, the level of geomechanical risk associated with the barrier design as proposed was considered low and the level of hydraulic risk was considered moderate. The largest uncertainty that remained was the possibility that unfavorable geologic structures, such as faults and dikes, would act as conduits for leakage of impounded water into the new workings. Although the study indicated only minor steady-state leakage would occur through a small number of known structures, the presence and full leakage potential of threatening structures in the barrier could not be reliably known until the barrier was mined. One longwall panel has been completed adjacent to the barrier with no evidence of water flow even in fractured zones. Thus, as predicted by the modeling and analysis, it appears that abutment stresses imparted on the barrier during mining did not substantially alter the natural hydrogeologic characteristics, or leakage potential, of the barrier. The longwall coal mine water-barrier pillar design and performance are considered a success.

Downloadable PDF:  Design and Performance of a Longwall Coal Mine Water-Barrier Pillar 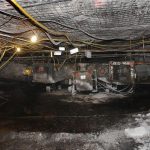