A geotechnical study was conducted to identify the cause(s) of stope instability at the Ashanti Mine (Obuasi, Ghana). As part of the investigation, laboratory testing of rock was performed and the rock mass was classified according to the Q-System (Barton et al., 1974). Numerical analyses were performed using the computer program FLAC (Itasca, 2001). The observed failure zone around the stopes was simulated using both Mohr-Coulomb and Hoek-Brown (Sheorey, 1977) models. Yielding along peripheral graphite bands and tensile failure were clearly identified to be the major contributors to stope instability. 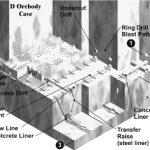