The evolution of surface subsidence is an important focus of study above Molycorp, Inc.’s newest block cave at the Questa molybdenum mine near Taos, New Mexico.  The case study compares mature glory hole subsidence over the Goathill Orebody and subsidence emerging in its earliest stage over the new D Orebody block cave.  Subsidence above the D Orebody was first detected in April 2003, 30 months after caving was initiated.  Caving propagated to surface through 550 m of overburden at an average rate of 0.21 m per day. At the end of 2004, an average of 100 m of draw over a 1.4-hectare (ha) block produced a near-circular subsidence basin 5.8 m deep at its center and 90 m offset from the center of the block.  Observations to date indicate a cave ratio of 10:1 and a gross cave bulking factor on the order of 10%.  Historically, cave-angle projection models have been used to predict subsidence extents for reclamation planning.  In light of evolving regulatory concerns, efforts are underway to develop a more accurate subsidence predictor using a three-dimensional (3D) numerical model. Particle Flow Code (PFC3D), a discontinuum “ball” code, was selected for modeling because of its ability to simulate stress fracturing of the rock mass and large-scale mass flow underground and at the surface, which are believed to be the dominant physical phenomena governing the formation of block cave subsidence.  Advances simulating subsidence in the Goathill and D orebodies with PFC3D are discussed. 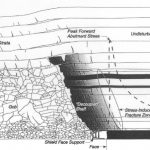 The Influence of Massive Sandstones in the Main Roof of Longwall Support LoadingPublications: Ground Control